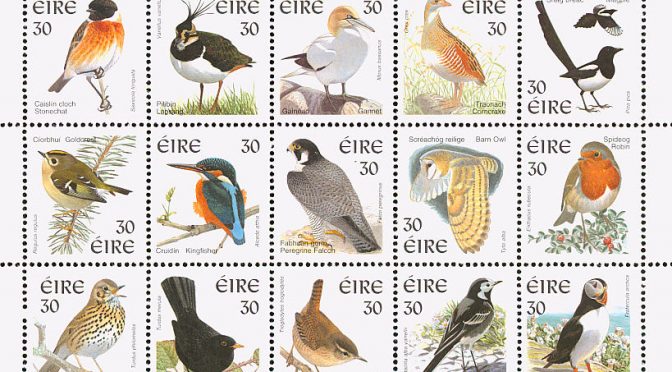 Within the Flight magazine, there is a fairly regular series, ‘Collecting Complexity’, featuring in-depth analysis by our Secretary Mel West, of the more complex bird stamp sets. Specialist Articles features some of these, and other offerings, for your perusal.

Australian KGV sideface definitives are highly collectable. Always interesting and colourful, some occasionally hard-to-source, these stamps are the most researched of Australian stamps.

A Collecting Complexity article from Flight … Mob Rule … ” The Emu (Dromaius novaehollandiae) is a flightless bird and after the Ostrich, is the second largest of this type in height.

It is endemic to Australia, and, according to my ancient but dependable Slater/Rigby field guide (Volume One), widespread on the mainland in nonurban areas such as open grassland and shrub land, but no longer found in Tasmania … read more

The Dissolute Fowl …. “Even if you have little inclination to comprehend the myriad of variations in the King George V ‘Heads’ or ‘Sideface’ issues of Australia between 1913 and 1936, as analysed so ably by Mel West in the September 2019 edition of “Flight”, it is noticeable that the design of one stamp sticks out from the rest, the penny red engraved issue of 1913, the very first in the series ……. Read the full article

A fabulous series of bird stamps designed by Killian Mullarney, and beginning in 1997.  Mel has written a trio of articles below. Having read these, there shouldn’t be much you don’t know about these beautiful little stamps!

“I think there should be a health warning if you want to collect these. They will drive you
mad.

I certainly had one dealer look at me as if I was bonkers when I said I collect these. Mainly small stamps, most just 22x25mm, often with a light blue squiggly security bar and with a rectangular or circular vignette background.” Intrigued? then read the full article

“Here’s something different. Just one bird and despite several incarnations, essentially the same design.

No, not the New Guinea issues. Same period, but wrong continent. We are off to South America and the rolling plains of Uruguay. Think corned beef, but wings.” ….. Read more

A number of articles here, the first two Quandary  articles are standalone but, they effectively act as an introduction to Guatemalan Quetzal issues.

In addition, the first Quintessential article goes further and builds on something first explored in one of the other articles.

A Quandary of Quetzals – Part One – What a lovely bird. The picture doesn’t do it full justice for as well as its glowing plumage, its tail is longer than its body.

The Resplendent Quetzal; resplendent because of that greeny gold iridescence as well as its other rich red, black and white plumage.

A Quandary of Quetzals Part Two

I have recently received an email from the Royal Philatelic Society, encouraging our members to register for the Virtual Stampex.  It is free to register and attend. The show runs from 1st – 3rd October 2020 and to register you just need to head to stampex.vfairs.com. Virtual Stampex is your opportunity to buy, sell, learn, … END_OF_DOCUMENT_TOKEN_TO_BE_REPLACED

Now that the September Flight magazine has been published, I will get cracking on adding lots more content for the website. Sincere apologies for the lack of new articles/pages recently, but it’s been pretty manic registering everyone, setting up member profiles and producing Flight !! Please do visit the site in 10 days or so … END_OF_DOCUMENT_TOKEN_TO_BE_REPLACED

I am in the process of inviting Bird Stamp Society members to register on the new website. Members will need to register (only once) with the website in order to logon, and hence see the Members Portal, with a range of benefits. The Portal currently has back issues of Flight from 1995 to date, and … END_OF_DOCUMENT_TOKEN_TO_BE_REPLACED

No, there is nothing wrong with your PC, or your eyesight …. the main menu items have changed in sequence!! The website main menu has been restructured as the Gallery dropdown menu was interfering with the Search box. The Flight menu item has been moved two places to the right, and the Contact Us menu … END_OF_DOCUMENT_TOKEN_TO_BE_REPLACED

We have started to construct the Gallery, an area of the website that will exhibit the wonderful world of bird stamps, through an array of pages featuring specific bird stamps or bird themes. The first of these pages displays Kingfishers. Next up will be Owls, followed by Penguins, Birds and Aircraft, Bird Stamps through time … END_OF_DOCUMENT_TOKEN_TO_BE_REPLACED

We have now added some Frequently Asked Questions to the website. You can find these under the Knowledge Base drop-down menu.

We have been developing a new website for the Bird Stamp Society during the ‘lockdown’ period. Much of the early content will be snippits of information out of old Flight magazines, but our aim is to make this a website of dynamic content, with frequent page updates, new articles in the Knowledge Base area, blog … END_OF_DOCUMENT_TOKEN_TO_BE_REPLACED