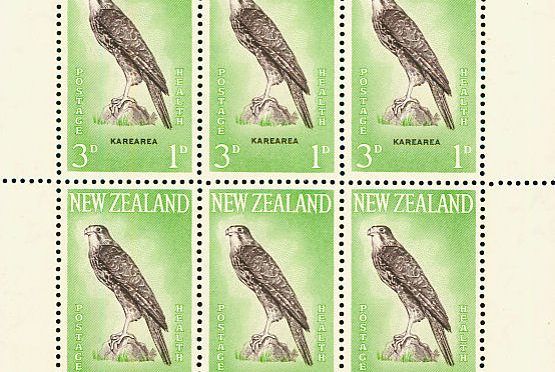 From Fairy Terns to Parakeets

In the first of this small series of blogs about New Zealand’s Bird of the Year poll (Te Manu Rongonui o Te Tau) which has been run annually since 2005, I introduced the most recent five winners and then sought to match them with stamps that New Zealand had issued. This next set presents more winning birds and stamps and follows the same pattern, rolling backwards with each year’s winners. This time it’s the batch of five between 2010 and 2014.

In 2014 the Tara iti or Fairy Tern was the successful bird chosen. There are three sub-species found in the south-western Pacific and the one that breeds in northern New Zealand – the New Zealand Fairy Tern (Sternula nereis davisae) – is listed as critically endangered. Indeed, it is New Zealand’s rarest native breeding bird and it is believed that there are only about 40 birds remaining, nesting at very specific locations in North Island. Its status is highly precarious. In 2018/19 there were believed to be only five breeding pairs left with the sub-species threatened by introduced predators, weather, tidal conditions and coastal developments.

Regrettably, there is just a single stamp featuring the Tara iti, appropriately issued also in 2014 as part of a series of singles and a mini-sheet of endangered seabirds.

I have recently received an email from the Royal Philatelic Society, encouraging our members to register for the Virtual Stampex.  It is free to register and attend. The show runs from 1st – 3rd October 2020 and to register you just need to head to stampex.vfairs.com. Virtual Stampex is your opportunity to buy, sell, learn, … END_OF_DOCUMENT_TOKEN_TO_BE_REPLACED

Now that the September Flight magazine has been published, I will get cracking on adding lots more content for the website. Sincere apologies for the lack of new articles/pages recently, but it’s been pretty manic registering everyone, setting up member profiles and producing Flight !! Please do visit the site in 10 days or so … END_OF_DOCUMENT_TOKEN_TO_BE_REPLACED