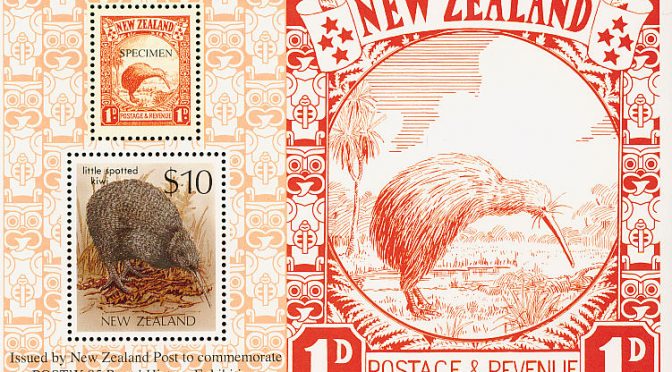 The first five – Kiwis, Kakapos and all that

Still rolling backwards, we finally reach the initial five years of New Zealand’s Bird of the Year poll. These were the birds chosen from its introduction in 2005 up to 2009.

In the fifth year of the poll – 2009 – a Kiwi actually got a look in as a poll winner, although it was uncharitably dubbed by some as the, “flightless national bore.” What is less clear is which Kiwi won. Whilst this flightless bird is unique to New Zealand, there are actually five different species. The largest is the Roroa or Great Spotted Kiwi (Apteryx hasstii), which has vulnerable status and is found in areas of the South Island; the Little Spotted kiwi (Apteryx owenii), the smallest species of all, weighing up to 1.9 kg and restricted to a few small offshore islands and protected mainland reserves; the Rowi or Okarito kiwi (Apteryx rowi) a recent addition that is scarce and found only in part of the Okarito forest on the West Coast of South Island; the Tokoeka or Southern Brown (Apteryx australis), also found only on South Island; and finally, the North Island Brown (Apteryx mantelli) is common across much of North Island. Oh, this one hold the world record for laying the largest eggs relative to its body size. Sounds painful.

I have recently received an email from the Royal Philatelic Society, encouraging our members to register for the Virtual Stampex.  It is free to register and attend. The show runs from 1st – 3rd October 2020 and to register you just need to head to stampex.vfairs.com. Virtual Stampex is your opportunity to buy, sell, learn, … END_OF_DOCUMENT_TOKEN_TO_BE_REPLACED

Now that the September Flight magazine has been published, I will get cracking on adding lots more content for the website. Sincere apologies for the lack of new articles/pages recently, but it’s been pretty manic registering everyone, setting up member profiles and producing Flight !! Please do visit the site in 10 days or so … END_OF_DOCUMENT_TOKEN_TO_BE_REPLACED